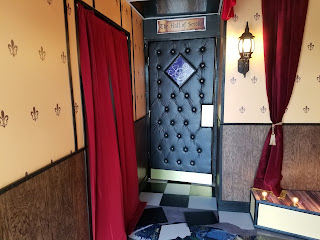 Dede and I went to another escape room this weekend!

It was in Aubrey, TX, about 30 minutes north of us.  Since we live far north of Dallas already, the escape room company was well north outside of the Dallas/Fort Worth metroplex.

It was run by a woman named Tina, and she only had one game to play, "Hall of Scrolls", which she designed herself.  She chose to make it Bible-themed; one must have Bible knowledge to complete it (a fact she really should make known to her customers before they decide to play).  The back story of the game involved a church that was about to be torn down unless someone could find gold rumored to be in a secret passageway. 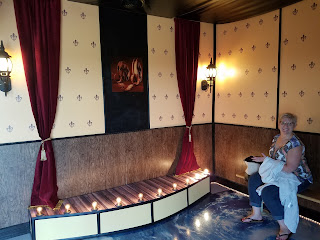 We did really well, as we still remember our Sunday School days.  The game was divided into six parts.  We aced the first part, "Books of the Bible"--matching verses from the Bible to their Bible book--in seven minutes.  The next part, "The Six Paintings", in which one must assemble six four-piece jigsaw puzzles of paintings of famous biblical characters, we solved in five minutes.  This opened a secret door.

Inside the new room, saw a strongbox on a shelf and other strange things attached to the walls, but nothing obvious to do; we searched for three whole minutes before we found a hidden key.  The key unlocked a cabinet containing forty square-shaped jigsaw puzzle pieces of the painting "The Last Supper"; we solved it in five minutes; we now had forty minutes left on the clock and still hadn't needed a hint.  Pretty good!

The next puzzle was called "Tags", in which we had to match twelve circular tag shapes describing each of the twelve disciples with their name; we knew how to do that one too and solve it in four minutes.  Next, a loud sound announced the game called "Blocks"; about eighty wooden blocks fell out of a hopper with strange cuneiform glyphs on them; we had to match the glyphs to a grid on the wall; this took us nearly twenty minutes since there were only two of us (up to six are expected to play).  When we finished matching them all, we were staring a a grid of letters; we needed our first hint to realize we should try reading the letters as words to spell out the names of the twelve disciples: Simon Peter, Andrew, James, John, Phillip, Thomas, Matthew, James, Thaddeus, Simon, Bartholomew, and Judas.  A drawer popped out of the wall containing a strange box with several keys; one of the keys opened the strongbox that contained six pieces of (chocolate) gold.  The church was saved!
If you get a chance, jump on the bandwagon and try one of these escape rooms. 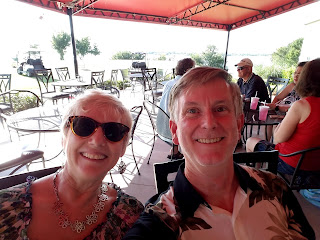